Only 48 days of drinking water left in Hyderabad? 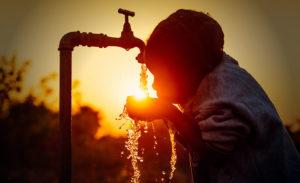 With an ample amount of monsoon rains Hyderabad received initially, it is now staring at a severe water crisis.

No rains in the catchment areas have resulted in reservoirs not receiving fresh inflows and according to a report; the city has just 48 days of drinking water left.

For around one crore population of twin cities of Hyderabad and Secunderabad and peripheral areas of Greater Hyderabad, the drinking water supplies will last till August-end.

Officials quoted in a report said that compared to last July, water levels in all the reservoirs this July are way down by 12 feets that eventually gave sleepless nights to the Water Board.

Senior officials are speculating that the present levels in all the drinking water sources would serve the city’s needs until the end of August.

Weeks after monsoon officially entered Telangana, there are no fresh inflows in the drinking water sources — Nagarjunasagar (Krishna), Sripada Yellampally (Godavari) and twin reservoirs of Osmansagar and Himayatsagar.

Last week Chief Minister K Chandrasekhar Rao chaired a meeting for the construction of a reservoir at Keshavapur village on the city outskirts.

The CM had also instructed the officials concerned to construct a dedicated drinking water reservoir for Greater Hyderabad to mitigate the drinking water problem.

Senior officials, however, said they are optimistic about rains in the coming weeks.

“If we get a bountiful spell in the next two-three weeks, the reservoirs will get copious inflows and the worst can be put behind us,” an official added.

In its daily forecast bulletin, the weather department mentioned about subdued rainfall activity in Telangana during the next 4-5 days.

While in Tamil Nadu, Chennai is facing one of the most severe water crises in several decades.

A special 50 wagon train carrying water from Tamil Nadu’s Jolarpettai in Vellore and reached the state capital on Friday.

Hyderabad's Pharma Hub Gets a Boost

Telangana proposes for an aircraft and submarine museum in Hyderabad

International Folk Fest ‘Root Folkways’ to be held in Hyderabad