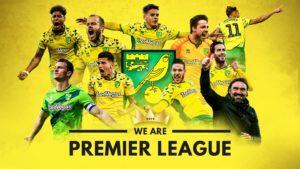 Norwich City and Sheffield United have gained promotion to the Premier League for the 2019-20 season.

Norwich was relegated at the end of the 2015-16 season of the Premier League. They sealed a comeback to the English top flight after three years by beating Blackburn Rovers 2-1 on Saturday.

Sheffield United beat an already relegated Ipswich Town 2-0 on Saturday to move to 88 points for the season.

The 12-year wait for the promotion to English top flight ended for Sheffield United when Leeds United drew 1-1 with Aston Villa at Elland Road.

The Canaries look well placed to win the Championship in the 2018-19 season as they are three points ahead of Sheffield United with just one match left in this season for both the sides.

Now, all the eyes turn towards the third available promotion spot in the English Football League Championship.

Leeds United are in third place with 83 points while West Brom are in the fourth position with 80 points.

Aston Villa are in the fifth position with 76 points while Derby County are in sixth with 70 points from 44 games.

Middlesbrough, currently in seventh position have 70 points from 45 matches and will be hoping from a massive slip-up from Derby in order to boost their hopes for playoffs.

As per the current positioning in the points table, Leeds will be playing Derby while West Brom will be playing Aston Villa in the playoff semi-finals with the winners facing each other in the final.

The winner of the final will be gaining promotion to the Premier League for the 2019-20 season.